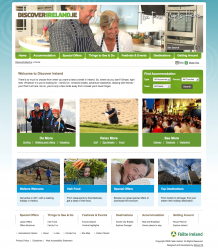 Fáilte Ireland operates Ireland’s Home Holidays website, www.discoverireland.ie. Featuring information on Irish accommodation, things to see and do, what’s on and special offers, the website is supported by a comprehensive media campaign throughout the year.

Ballymote is most famous for its castle, which was once the strongest in Connaught. Moated, double-walled and double gated, it was conquered many times nonetheless. Conquerers included the O’Connors of Sligo - 1317, Mac Diarmada - 1347, the MacDonaghs 1381, oConor Sligo 1571, English forces - 1571 and 1584, McDonaghs 1598, English Forces again - 1602. By this time the castle was already in a bad way, but in 1690 the moat was filled in and it fell into further ruin.

The farmhouse cottage is a replica of the original Coleman home, which will give visitors a unique insight into how people lived in the early twentieth century in Ireland. The building has three rooms, is constructed with red sandstone and is roofed in traditional thatch. The cottage contains everyday cooking utensils, furniture, crockery and other artifacts, which date back to the 1920’s. These give the visitor a living representation of life during that time.
Visiting by appointment

Rathcroghan was the seat of Royalty in the West of Ireland for nearly 2000 years. Here, you can explore Irish history through the ages:; walk the land of Celtic Warrior Queen Maeve, see where the great bulls fought their epic battle in the Cattle Raid of Cooley, follow the Druid’s quest for knowledge to the sacred triple spring of healing, stand where the Gaelic Kings stood to fight invading tyranny and receive their rightful crowns.

Douglas Hyde was first President of Ireland and co-founder of Conradh Na Gaeilge (the Gaelic League). The interpretative, exhibition and information centre, is dedicated to this remarkable man and is housed in the church, where his father was rector.

Although born and reared in the Anglo-Irish tradition, Douglas Hyde was a scholar who was profoundly interested in the Irish language and traditions and published many works under the pen name “An Craoibhin Aoibhinn”.

The IRISH RAPTOR RESEARCH CENTRE is a scientifically managed sanctuary for Birds of Prey and Owls.

Situated on 27 hectares, the sanctuary is home to about 350 birds and animals out of 75 species.

King House is a magnificently restored Georgian Mansion located in Boyle, County Roscommon. It was built in the early 1700’s for Sir Henry King,

South Sligo Spring Walking Festival 2011 has announced the dates for their walks in the general Lough Talt and Ox Mountain area. The week-end of April 9th & 10th is when it is all happening and these are dates for the dairy. If you have friends living away from home who like challenging walks let them know as every year this festival attracts walkers of great and little experience from all over Ireland. Further info from www.oxmountain.com or at the Tourist Office on Humbert Street. 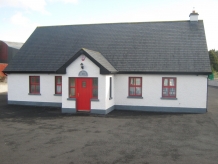 The James Morrison Teach Cheoil or the Morrison Cottage commemorates fiddle player James Morrison, his contemporaries and the musicians of the Riverstown area. The building is located off the entrance road to Riverstown Community Park. The Cottage was officially opened by Minister for Gaeltacht Affairs, Dinny McGinley on Friday 13th May 2011. The attendance included Minister, John Perry T.D., Tony McLoughlin T.D., Senator Michael Comiskey, Senator Labhrás Ó Murchú, Árd Stiúrthóir an Chomhaltais and a large gathering of people from the local community and from farther afield. Joe Cunningham, who learned his music from James Morrison, travelled from New York for the event as did Raymond Conlon, President of the Sligo Association in New York. Joe Cunningham who is in his hundredth year recalled events from the life of James Morrison dating back to 1930s and 40s. The building was blessed by Fr. A.B. O’Shea, parish priest of Riverstown and a commemorative plaque was unveiled by the Minister. There was music in every corner of The Morrison Teach Cheoil and the sessions lasted away into the night. Archive material relating to James Morrison’s legacy of traditional music will be housed at the Teach Cheoil.The Riverstown Branch also posesses a photographic record relating to all of the Morrison Festivals.

A visit to the Sligo folk Park is a true experience of rural and Irish heritage. Here, in the heart of County Sligo, the cultural history and heritage of the whole region comes to life. This is a place, which is great for young and old. Children can discover how their great grandparents used to live and, those who are still young at heart, can rediscover how life used to be in days gone by.

Check out Live Sound Recordings in the Comhaltas Archive